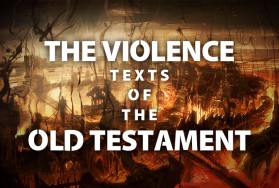 WHATABOUT-the-Old-Testament?
Sarah Bailey:  But, as you know, we can quote chapter & verse from the Bible and come up with comments which glorify rape, murder and suchlike. Surely, the detail is in the interpretation?
This is a classic a case of WHATABOUTISM? Usually it’s a cop-out used by the Left.

Anyway. Christians, on the whole, are not utterly reliant on the Old Testament. Besides which, the Koran is the literal word of Allah. The Old Testament has parts in which God speaks; but every word is not meant to be the word of God. Muslims stress this distinction between the Old/New Testament and the Koran themselves. Every single Muslim on the planet must accept that every word in the Koran is literally the word of Allah. Muslims agree on this. Most Christians hardly read the Old Testament; which is mainly story-telling and narrative anyway

In addition, are most Christians still determined and influenced by those violent and bloody passages in the Old Testament? Are more than 300 people killed each month by Old Testament believers as they are every month by people directly inspired by the Koran? The Global Jihad claims at least 20 lives each day. Often it's much more. Many Christians do bad things; but not usually on behalf of their religion.

If you make the six-form mistake of saying "All religions are equally bad", you will end up saying some very silly things, as many people do.

The Koran has over 100+ passages that explicitly extol violence against "unbelievers". The New Testament has none. And even the violence in the Old Testament is not always God extolling violence - though sometimes it is. The violence is often part of various historical narratives. 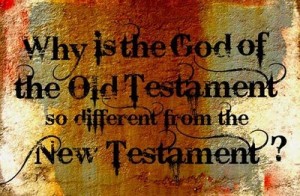 Sarah Bailey: If every Muslim interpreted those verses in the Koran to mean exactly that, why is there not a civil war worldwide, with every Muslim armed to the teeth and fight against the unbelievers?

That doesn't mean that they don't all believe it's all the word of Allah. They all still believe that. Some parts of the Koran are unclear. That's where the disagreement comes from. None of this stops the Koran from being seen as the literal word of Allah. What it sometimes means is that the Shia will say, "Allah said X", and the Sunni will say, "No. Allah said Y'. And then they kill each other precisely because both think they have got the word of Allah right.

In any case, there is "civil war"in the Muslim world. Don’t you watch the news? The Shia has been fighting Sunni for 1, 400 years. What do people think is happening in Syria? That they are fighting for Western-style democracy and cinema complexes? Most Sunni fighters are fighting for a Sunni sharia state. The Shia are fighting to retain the Shia political “hegemony”. Democracy, freedom, etc. do not enter the picture – except, of course, the freedom of Sunni Muslims to build a Sunni state and restrict the freedoms of Shia Muslims.

In any case, why would Muslims "fight" in countries in which they are a minority? That doesn't make sense. They will be defeated, evidently. No. Muslims are waiting until they have the numbers. And then there will be civil war; as there is in many countries today in which a Muslim minority is becoming stronger and as has happened many times in history for the same reason.

It's also close to civil war anyway in parts of Paris, Marseille, Nantes, Oslo, Stockholm, Malmo; and less so in Bradford, Burnley, Birmingham, etc. Give it up to twenty years and there will be civil war. Muslims, or many of them, are waiting for the right numbers. There's no point in fighting if you are going to lose. But that's going to change. And Muslims know it. That's why Muhammad himself waited until he had the numbers. Until then, he preached peace and Interfaith. (E.g., the passages in the Koran which have been “abrogated” by Muslims precisely because of their pseudo-peaceful content.) That is, he practiced taqiyya. As soon as he got the numbers, then the conquering, enslaving and killing began - and it has continued ever since.

In any case, how do you interpret "Kill the Jews wherever you find them”?  And if Muslims can interpret that phrase, then can I interpret "To kill one person is to kill all mankind" too? Why do Islamophiles only interpret the violent phrases in the Koran but keep the seemingly peaceful ones in their original form?

I don't think Muslims do "interpret" most of these violent passages anyway. What they do is interpret them to non-Muslims when they question them. Otherwise they hold them to their hearts.
Posted by Paul Austin Murphy at 19:26

THE LABOUR PARTY & THE FABIANS

The Labour Party, on the whole, isn't a Marxist or a communist party. However, there are very many cross-currents and interactions between the Labour Party and the Trotskyist/communist Left, mainly on the periphery but also deeper within.

As for the Fabian Society, it isn't a “revolutionary" (as in violent revolution) organisation but it is still, nonetheless, uniquely dangerous and elitist. Its approach to "radically changing society" is very similar to that taken by the followers of the Italian communist, Antonio Gramsci.

This blog is in the process of being updated with older material. 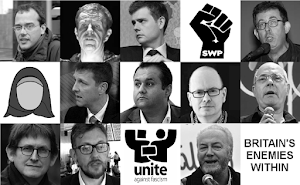